Not all fusion cafes are made equal.

Buoyed by the previous week’s dine-in experience, we ventured out again for another Asian fusion brunch venue. This time we headed to Chippendale, for the promise of a  Japanese fusion breakfast, and we were left a little bit disappointed and underwhelmed.

The Little Spoon Fusion Café is located in one of those pedestrianised alleys immediately behind Central Park. Greeted by a pair of yapping dogs, we elected to dine inside as it was a particularly windy and cold day in Sydney. Immediately we were welcomed by the interior; it was warm and inviting with plenty of fresh flowers and plants, and there were plenty of cushions to embrace your body in a cloud of soft feathery goodness. 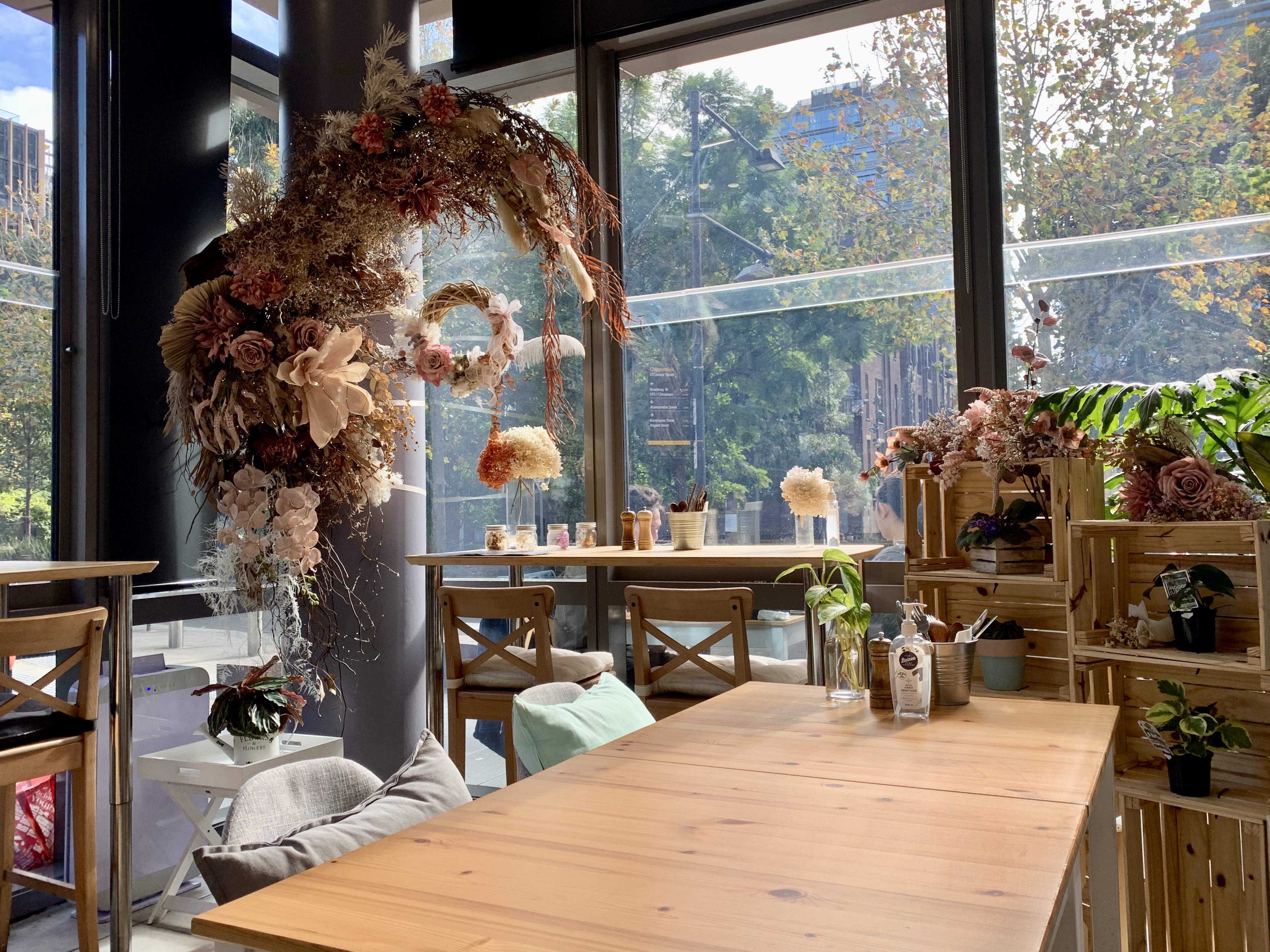 Browsing through their menu, they had breakfast service till 11.30am (the usual café breakfast options); a list of Signature dishes, and a list of Japanese fusion burgers.

I opted for the Seafood Soba noodles (fish and soft-shell crab, with fish roe), while my wife had the Eel burger, while we had a latte each.

Have you ever had a $31 burger? We justified it, as in the description of the burger it stated that you were getting a 200g piece of Unagi. Which is unheard of! If you’ve had sushi recently.

The Unagi was exactly what you’d expect it to be, the same usual flavours but if anything, it was saucier than the sushi. It was served hanging out of the ends of a brioche bun, amongst mayo, cheese, a poached egg, and thinly sliced fresh veg fillings. A knife and fork were required to consume this burger stack, so could we really call it a burger?

My Soba noodles came on a large plate, plated up in an Insta-worthy way, i.e. piled high was the green soba noodles, capped off by a giant fried soft-shell crab, ringed with a phalanx of fried fish nugs, and a generous dollop of fish roe.

I have to admit, I was a bit disappointed that the soba noodles were served cold (especially as it was a cold day), and it wasn’t a run-through-cold-water kind of cold, but more like an out-of-the-fridge, leftovers kind of  cold. The fish was mushy, although the outer fried coating was nice and crunchy. And although the soft-shell crab was huge, for a soft-shell crab (reminded me of the evil crab from Moana) it tasted more gutsy than sweet. The roe wasn’t a high-quality roe, so it tasted more like eating gritty sand, than a pleasant burst of fishy goodness. And although the serving was large, I found myself eating it because I don’t like wasting food, rather than really wanting more and more.

Hey, we’re getting out and about and spending money again, so that’s the important thing. And along the way, we’re going to have some hits and some misses. Today, it was a miss for The Little Spoon Fusion Café, the ironic thing, was that after forgetting to give me a teaspoon with my latte, there was no extra little spoons in sight, except for it being in the name of their store.

View all posts by touchsmelltastesound